East Poultney is a town that was built over the course of a century.

It changed from the frontier into a village that supported agriculture and industry, and the frontier continued to move west — in part because of Horace Greeley’s popularization of the advice: “Go west, young man.”

Built in 1896 in Queen Anne style, this school represents an exaggerated nostalgia for British architecture. During the late 1800s, architects returned to New England to study its classic Georgian buildings. At the same time, new technologies allowed architects to use ornate colors and to use geometric patterns, made possible in part by the introduction of machine lathes. 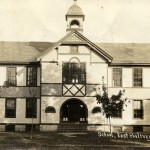 The result is this schoolhouse, the last major building constructed on the green. It offers the simple patterns of Queen Anne style, such as the small-paned lattice of the windows and the straight lines of the roof. The designers created a sense of depth through the fish-scale pattern of the shingles, the filigreed detail in the upper gables, and fanlights framing a recessed entrance.

The East Poultney Schoolhouse accommodated 8 grades, 4 in each downstairs classroom with an auditorium on the second floor. It was one of 4 schools that consolidated students from one-room schoolhouses around the larger township, and it served its students until 1966.

Today it’s maintained by the Poultney Historical Society and houses its offices, research library, as well as the bulk of its historic collections. The Schoolhouse was restored to its original color scheme in 2012 with the advice of Leonard Spencer, a prominent Victorian architecture and paint expert from Cabot, Vermont, and the talented team from LuxBrush Painting Company of Manchester, Vermont.